In 2008, Nexans recycled almost 22 000 tons of cable manufacturing waste from its European and African sites, as well as several thousand tons of scrap cable collected from its customers. With 30 years of experience in the collection and recovery of end-of-life cables and cabling production waste, Nexans offers a complete recycling solution. In 2008, Nexans created Recycables - in which it holds a 36% stake along with Sita, a Suez Environment subsidiary, to provide a comprehensive recycling solution. Copper and aluminium granules are melted down. Plastics are recycled into external cladding, sidewalk curbs or road cones. Grinding powder is recovered as packaging products. Recycables supplies Nexans with recycled copper and aluminium. Using an exclusive continuous casting process implemented in the plant at Lens, France, Nexans was able to recover 12,000 tons of recycled copper powder as wire in 2008.

More information about Nexans, RIPS and SITA in the end of the article. 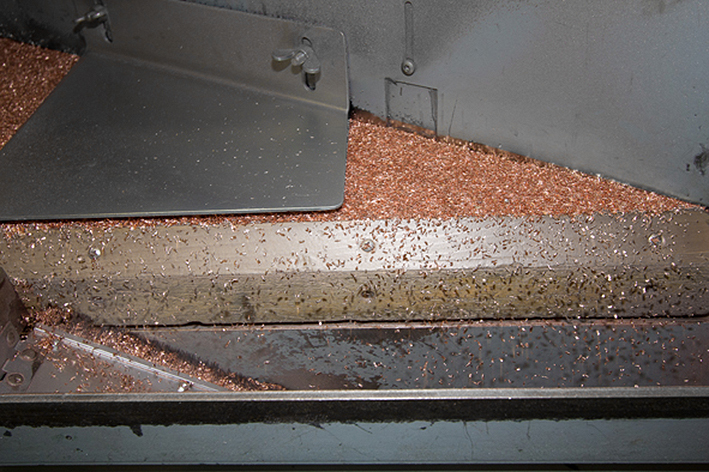 Nexans S.A. is the world’s largest manufacturer of cables. These cables are used in construction, industry, computer networks and city infrastructure. To take advantage of the valuable material still remaining in scrap cable, Nexans started recycling as early as 1965, through its subsidiary RIPS (Recyclage Industriel de Produits Sidérurgiques). The relationship between Nexans and Eldan Recycling is a long one, and Nexans acquired their first Eldan recycling equipment way back in 1982. In 2008, using their Eldan equipment, RIPS recycled almost 22,000 tons of cable manufacturing waste from its European and African facilities, as well as several thousand tons of scrap cable collected from customers. In 2008, Nexans’ recycling activities were restructured, and a joint venture company, Recycables, was started in cooperation with Sita Environmental, to provide a comprehensive recycling solution. For this purpose they needed new recycling equipment, and the question was – would they continue with Eldan recycling equipment or choose another supplier?

Searching for the right equipment

Nexans S.A. is a worldwide leader in the cable industry, and offers a wide range of cables, cabling systems and services. The foundations of the company date back to 1897, and they now have more than a century’s experience of progress and innovation. As the company itself produces a lot of cable waste in their manufacturing process, they decided in 1965 to start their own recycling facility; RIPS (Recyclage Industriel de Produits Sidérurgiques).

This activity grew quickly over the coming years, and in 1982, RIPS added to the facility by acquiring a separation system from Eldan Recycling. Since then they have acquired several more machines, from Eldan itself, and from Scandinavian Recycling (later acquired by Eldan). They have acquired e.g. Shredders (S400 and S1000), a Pre-Chopper (1602), an LM 455 and a Barracuda (1200).

Because of new regulations, in 2007 RIPS was forced to close down its facility in Calais, France, and the company was posed with with a difficult decision – to buy new equipment or to move the old equipment.

Recycables wanted to process mixed cables at the approximate capacity 5.5 tons per processing hour. Input material would come internally from Nexans (second hand cables, production errors) and from SITA (scrap cable), as well as externally from scrap dealers and cable manufacturers. One of the largest telecommunications companies in France sends them around 6,000 tons cables a year. The recycled material is sold to the parent company, or to various major European customers, for reuse in production.

That Eldan had supplied the equipment for the previous plants did not however, make them the obvious choice for a new one. “I remember that it was just like dealing with a completely new customer, as the contact people, the location and the requirements were entirely new” says Christian Duffau, Sales Manager for Eldan in France. “There was an external project manager evaluating the offers and equipment available on the market. You might say that Eldan having supplied the old equipment was both an advantage and a disadvantage. The fact that the current equipment had been in production for up to 30 years and was still running well, was naturally an advantage. The long and stable history of Eldan, and the promising future was also to our advantage. The fact that they initially only knew about our older equipment could have been a disadvantage, since this equipment has developed a lot over the years.”

Philippe Taillez, Managing Director at Recycables, supported the decision to continue using Eldan equipment, even though other companies within the SITA group had in the past decided to go with a domestic brand; “Since we had long experience from the industry, we knew what we were looking for. The French consultancy firm investigated the market thoroughly and presented us with the most suitable solutions. We looked at custom-made solutions as well as at standard plants. We also knew that the most interesting offer price-wise is not always the best investment. The global price, i.e. including running costs, is the figure that needs to be considered – particularly if you aim to process as much as we do at Recycables. The final decision was to go with Eldan again, as we had long and satisfactory experience of both their equipment and a rewarding partnership. They presented the best solution for both the equipment and the global pricing.”

The pre-chopping line basically consisted of a Super Chopper (SC2118) specially designed for processing cable waste. By pre-chopping the cables, the material is easier to process in the rest of the plant, thus achieving a greater processing capacity and higher output quality. “We were - and still are - very impressed with the Super Chopper. The more we use it the more incredible it seems” says Philippe. During the pre-chopping stage, the scrap cables are reduced in size and most of the ferrous material is removed from a manual sorting conveyor, which helps reduce wear on the other machines further on in the process. A further step of the recycling process includes a Tumble Back Feeder (TBF), a Multi-Purpose Rasper (MPR200), as well as an Overband Magnet (DM1450).

During primary and final granulation, the cables undergo a few more rounds of size reduction. The conductor and insulation fractions are separated, and further liberated ferrous material is removed. These steps include three Silos (V4 and SMV), a Heavy Granulator (HG209), an Overband Magnet (DM1850), and four Fine Granulators (FG1504). The material is now ready for final separation. During separation, the remainder of the ferrous and non-ferrous materials are split and separated. This final stage includes four Silos (SMV) and four Separation Tables (C26).

The complete cable plant has an approximate processing capacity of 5.5 tons per production hour, depending on the type of cable being processed. By processing e.g. power cables, capacity can rise to up to 10 tons per production hour. “Eldan makes equipment that we have found to be of high quality and very reliable. In a single day, we can process 100-120 tons of scrap cable” says Philippe.

Supplying a plant to a highly experienced customer who knows precisely what they want and need might, in some cases, be quite difficult. This however, was not the case with Recycables. “Right from the start, Recycables and the French consultancy firm had high demands and expectations on the upcoming plant right from the start, and they were very thorough throughout the project. I can safely say today that we supplied a plant with better specifications for output quality and quantity than actually stated in the contract” says Christian.

Working through an external project manager is different to working directly with the customer. ”Since there were other manufacturers involved in the project, for example for the manual sorting equipment, delays or changes made by others indirectly affected us as well” says Christian. “So the project took longer than it usually does in cases where we’re in direct contact with the customer. We had to go back to the drawing board many times, but the end result was very good! By maintaining an open dialogue with the other partners, most obstacles could be identified and dealt with at an early stage. The problems caused by others, which we couldn’t foresee, were easily taken care of at our end thanks to fast communication and short reaction times at our own production facility.”

Recycables is very satisfied with the project, and Philippe Taillez comments; “it’s a pleasure to be working with Eldan again. As a customer you know straight away that you’re in good hands and are benefiting from Eldan’s great experience. We were very satisfied with the project, thanks to the excellent follow-up and great commitment of the sales and technical personnel.”

In an industry that requires large initial investments, having a good reputation is very important. Customers today can be thought of as a marketing billboard, as they probably know your potential customers as well.

“Eldan has a really good reputation in the industry and is considered a very reliable supplier. As a long-standing customer of the company, I can only agree. The quality of the machines is very high, and the people you come in contact with at the company are highly experienced and competent. I also think that their partnership philosophy is quite remarkable. Three years after starting our project, results are ahead of the business plan, which is quite rare for this kind of industrial project. I would absolutely recommend doing business with Eldan,” says Philippe.

Nexans is a worldwide leader in the cable industry, and offers a wide range of cables, cabling systems and services. They aim to raise industrial productivity, improve business performance, enhance safety, and ensure long-term network reliability. The group has a worldwide presence, operating on all continents. In 1897, the Société Française des Câbles Electriques was founded, and over the years, the company has grown through mergers and acquisitions. The Nexans we know today was created in 2000, and today the company has more than a century’s experience of progress and innovation.

RIPS (Recyclage Industriel de Produits Sidérurgiques) is a Nexans subsidiary, and collects, ships, grinds and reuses cable waste. The company was founded in 1965, in Bonnefamille, France, where it started by recovering metals from scrap cables. Initially they focused mainly on electrical and telephone cable scrap. In 1982, they acquired their first equipment from Eldan Recycling. In 1988 RIPS was acquired by the large Alcatel group. At this point they had three recycling facilities across France. A year later, recycling activities were centralized to Calais.

SITA (La Société Industrielle des Transports Automobiles) is a subsidiary of the global wastewater treatment and waste management company Suez Environmental. The company has almost 80,000 employees worldwide, and in 2010 they had revenues of €13,869 million and invested €73 million in R&D. SITA has been an expert in global waste management for over 90 years, and is the specialist on waste treatment and recovery in the Suez Environmental group.