A consortium of companies in the recycling industry, including Eldan, have joined forces to develop a concept for handling the large amount of CFC-containing district heating pipes that are buried throughout Denmark

A consortium of companies in the recycling industry, including Eldan Recycling A/S, have joined forces to develop a concept for handling the large amount of CFC-containing district heating pipes that are buried throughout Denmark. The pipes contain 4,000 tonnes of CFC gases that will leak out over time if no solution is found. CFC depletes the ozone layer and its greenhouse effect is 4,000 times more powerful than CO2. At the same time, the materials in the pipes have recycling potential.

It is now many years since the highly climate-damaging gas CFC (also known as freon®) was banned and phased out as part of the insulation material that until 1987 was used in, among other things, refrigerators, freezers, air conditioners, and district heating pipes. While there are rules for how CFC-containing refrigeration furniture should be handled and recycled, this does not apply to CFC-containing district heating pipes, and there are about 26,000 kilometers of them buried in the Danish soil alone.

The consortium consists of Eldan Recycling A/S, Dan Jord A/S, Stena Recycling A/S, GasDetect ApS and the Danish Technological Institute, who together will spend the next few years developing a concept for handling and recycling the old district heating pipes. We owe this to future generations, says senior specialist Bjørn Malmgren-Hansen from the Danish Technological Institute:

- If we do nothing about it, the CFC gas leaks out of the pipes little by little, and thus the problem is left to the next generations. The insulation in the pipes contains so much CFC gas that it corresponds to a third of Denmark's annual CO2 emissions. In addition, the buried pipes constitute a valuable resource. They contain a lot of steel, plastic and PUR foam, which with the right technology can be completely or partially recycled.

The goal is to develop a treatment concept that enables the CFC-containing district heating pipes to be identified, shredded, sorted, and processed for recycling. This must be done by developing:

The goal: recycling at least 95%

Two of the country's leading companies in technology for waste management and recycling are participating in the project, Eldan Recycling A/S and Stena Recycling A/S.

The treatment concept for district heating pipes must build on the technology that Eldan Recycling A/S already uses to break down refrigerators and similar appliances, which also contain metal, plastic, and PUR foam. The goal is to ensure that 99% of the CFC gases from all processes are collected and that more than 95% of the materials in the pipes are recycled.

- Today, only the steel in the pipes is partially recycled. The other materials are typically deposited in landfills. We need to do something about this, and we already know a lot about how to handle CFC-containing refrigerators safely and in an environmentally friendly manner. We can draw on that knowledge in this project, says Jan Kjær, product manager at Eldan Recycling A/S.

Innovative solution to an international problem

Buried CFC-containing district heating pipes are not only a problem in Denmark, but also in other countries where district heating is widespread, e.g. in the Nordic countries, Germany, and the Baltics. There are no concepts on the market that can handle the pipes in a safe and sustainable way. Therefore, the technology suppliers involved expect that a full-scale solution will accommodate significant export opportunities.

Once the project proves that it is possible to remove the CFC gas and recycle the pipes, there will be an incentive to introduce legal requirements for treatment so that it will subsequently be possible to invest in full-scale plants. Therefore, the project partners expect to pave the way for both being at the forefront of legislation and achieving good business opportunities in the long term.

The project is supported by the Danish Environmental Protection Agency. 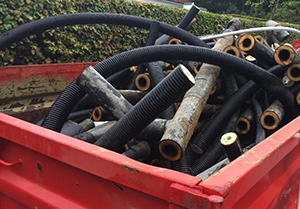